"SEN" is a short story about a small robot on a foreign planet, that deals with our perception of time and age. The full shortfilm is still in production, but here you can watch a small trailer/preview incorporating the shots of the first scene.

You can find background info, behind the scenes stuff and more images below.

I would like to notify you when I release the full shortfilm. No spam from me, I promise! 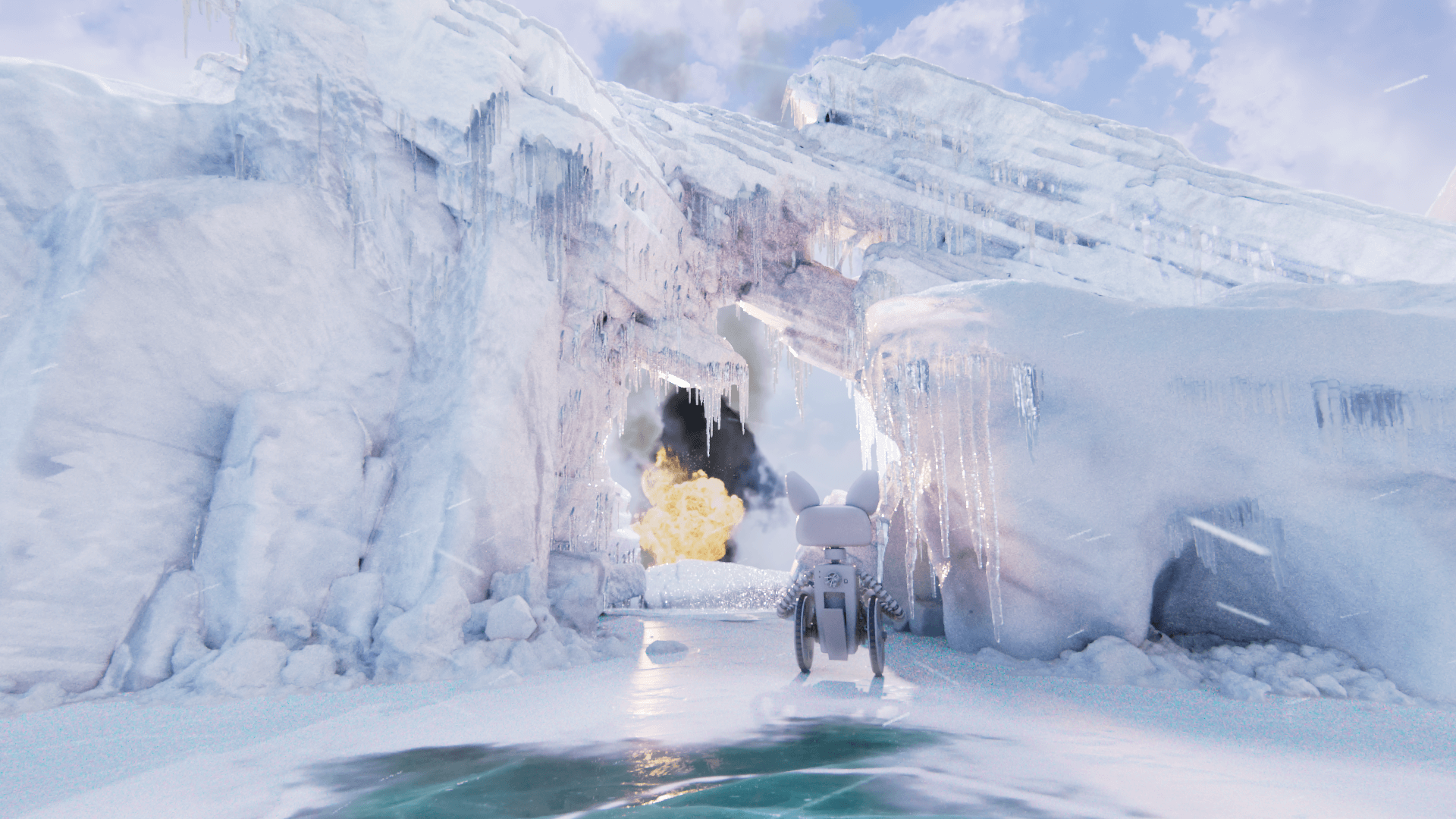 Using flour and some lightly sprayed water you can create pretty convincing miniature snow. I used an old Canon Eos 50d to take multiple pictures from every side, then fed the photos into meshroom, an open source photogrammetry program. After a bit of cleanup and remeshing in Houdini, I had some pretty convincing snow clumps.

I started preproduction around February 2020, with very vague ideas. It was clear from the beginning, that the main protagonist should be a robot, as my modelling, texturing and rigging skills are much better for hardsurface objects, than organic ones. Also, I really like robots, and have never really felt the fascination of creating digital humans or animals.

I started thinking about the story, all while concepting some ideas for the protagonist and setting. The first idea turned out pretty poorly, and was scrapped completely. Then, a first story started to form, involving the protagonist that made it into the movie, but with a completely different storyline. I spent a lot of time developing that story and also worked a lot on the details. The main problem was, that everybody would compare an animated film about a robot on a foreign planet to the very popular “WALL-E”.

That comparison could never be won by me, a single person with about a year to work on this. So I tried everything to separate my idea from WALL-E, the desert changed into an icedesert, the storyline was rewritten. About 2 months in, I now had 2 stories involving the little robot.
I wasn´t a hundred percent convinced about either, but with time, so I thought, I would find more solutions. With this project I really tried to embrace the iterative process of storydevelopment (and filmmaking in itself), which worked out pretty nicely.

About two months before I wanted to go into production, I still had 2 different stories, a decision had to be made. As I said, both stories weren´t at the point I wanted them at, something was missing. Some little twist, some surprise, something that makes you go “Ahhhhh!”. I began experimenting, asking crazy “what if” questions, what would happen if the robot did this, what if he turns around, and meets another robot of his type, what if… And bang. There was a twist. There was an idea. I was hooked, I knew this was it. It didn´t fit to any of the other storylines, so I scrapped them, and wrote another script, the 4th (or 5th?) one.

It turned out okay. Shapeable. It could become something. I rewrote the script dozen times, always improving on feedback given to me by friends, people on the internet, and especially my professor.
While writing on the script, I was planning the details of the environment, character and visuals. How would the portal look? What is this planet made of? How did the robot get here? What would a crashed spaceship in an icy desert look like? Many of those questions had already been answered while developing the first two storylines, others had to be rewritten, to fit the new story.

While writing the story I finished my robot concept, rigged it, and created some (very) basic setpieces. After the script was ready, I started creating a first animatic. Let me tell you something: Of all the many animatic versions I created, the first one was the hardest. It was the simplest by far, but I had to start with a blank slate. It was quite hard to convince myself to put in the time, making all those scenes, cameras, and cuts all while knowing, that in the end, it was just an animatic, nothing ever to be really watched, or put into a reel. It sometimes felt like time down the drain, but I knew that it was necessary, to end up with the possibly best version of my film. Also, I cant stress enough how important and useful all that feedback was, that I got. On a side note, it not only improved my film, but also gave me a much deeper understanding of what works and what doesn’t, and why that is.

Alright, enough about preproduction. I had my animatic, some changes would still be made in the process, but the groundwork was there. Now came the time, to put all the plans into action.
I structured my days simple: get up at 6, watch tutorials or read books until 9AM, then work until 9PM. After 9PM: free time. The weekends were also free. I later changed my routine to work until 8, and then put the missing 5 hours/week on Saturday. I have to admit, that later in the year, around December, my schedule got a bit more loose, as my sleep schedule began to break. But I made up for it by cutting the time I slept in from my free time, at least most of the time. Another rule I had, which helped me keep my sanity and not burn out, was that I always put social stuff before everything else (with reasonable restrictions). If a friend invited me for a get-together (which because of corona was rare), I wouldn´t decline because “I had to work”. This might not work for everyone, depending on how often people around you want to socialize. But most of my friends seem to (just like me) not crave human contact too much, also, as mentioned: Corona. So apart from spending evenings together on discord, there wasn´t much to keep me from working on the project. At the beginning of production I planned out the rest of the year meticulously, allocating weeks for all the different aspects of the project.
Modeling the robot, texturing and rigging took quite a big chunk out of that time, also time for animating, lookdev, lighting, rendering and comp had to be allocated. I also spent a lot of time working on the crater. Portal, wreckage, and my probably wayyy too complex mud shader ate up a lot of time. If I had to redo the project, I would work with more projections and shot based setups, than detailed environment chunks with procedural textures.
Also, I want to mention this yet again: feedback and iterative improvement! Detailed planning didn’t really work to hold the deadlines, but kept my productivity up.

While writing this I notice, that this might sound more like a diary than an actual documentation, but I believe it´s the best way to describe this journey.
At the time of writing this, the project is still massively in the works. I finished the 3d aspects of all shots of the first scene, currently rendering and comping like a maniac to at least get the first four shots done until the start of the new week. That week, apart from some other college assignments and some bit of RnD, will be a time for me to recharge. I will take a short break from the project, to then start fresh on the rest of the film. I am hoping (and praying) to get it done by the end of April, as I will then probably get really busy with my internship.
I really want to finish this project, and whatever the cost – I will, but also I really want to do some new things, I´m slowly getting tired of rendering snow… ;)
The number one trick I used, is to tell everyone I know about the project that I´m working on. This not only provides valuable feedback and creates a potential audience, it also restricts your brain from quitting, when it gets tough. There are those times, where everything is going wrong, and you just want to throw the project away to start something new. Now that you´ve told everyone, you have to deliver. And so you do. Take that brain!

What I have learned from this project: Feedback, Reference and iterative workflows are key. Keeping a tight schedule keeps productivity up. Spending a lot of time on the story is the best thing one can do, as it´s the foundation of everything. You cant polish shit.
I crave a break right now, but after a week of recharge I will be looking forward to finishing this project!

Whew! If you read all this, THANKS! You spent more time on this website than any visitor before you. ;)


Once again, here are my social media links. Feel free to shoot me a message! Would like to hear what you think :) You can also send me an email to SENshortfilm@gmail.com